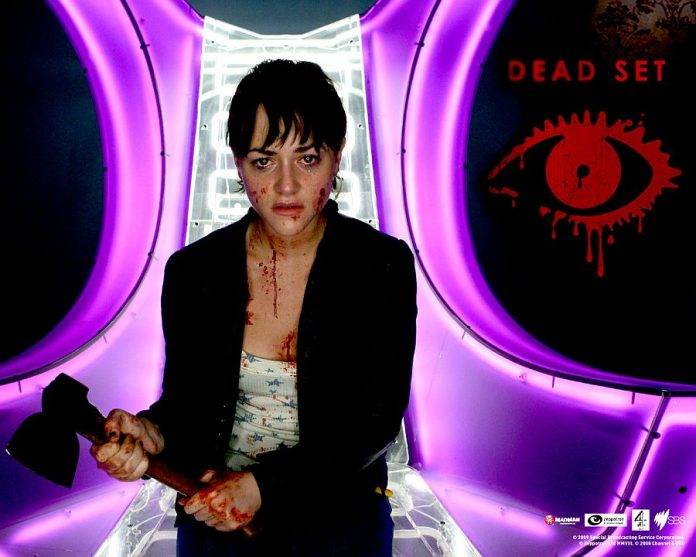 Oh, boy! I’m not sure if you watched this mini-series on TV back in 2008 when it was launched, but I only found about it very recently. And I am so glad I did!

Dead Set is the name of this TV Series (5 episodes, probably because it would’ve been too long for a full feature movie, even though the entire thing is only about 2 hours long!) and it’s an UK-made series. And it’s absolutely awesome!

The story is pretty simple: while the Zombie Apocalypse breaks loose outside, the contestants inside the Big Brother house have absolutely no idea about what is happening. Soon, things will change though and they will be quite happy to be locked inside the house, barricaded from the chaos happening outside. And their tale of survival begins!

Dead set starts with a pilot that’s 45 minutes long and continues with 4 shorter episodes (20 minutes each) so if you have time, you can easily watch the entire series in one go. I did so, even though I didn’t think I would: however, the series is so well done, the story so nice and the whole thing so believable that you simply can’t stop until the end!

We have some really, really strong characters and each type is really well done – from the annoying Patrick to the stupid Pippa and a story that unfolds quicker than a train going at full speed. The zombies are also there (fast zombies this time) and even though there are no explanations about how it all started, you don’t even feel that there’s a need for that. Basically, everything happens so fast and takes everybody by surprise that you don’t even have time to wonder. Nor do the characters in Dead Set, which probably describes best how things would be during the first few days of the Zombie Apocalypse.

The best part about Dead Set is that you can watch the entire mini series here for FREE and legally. And all we can hope is that the director and writer will team up again for something similar. Maybe a longer series!

And if you want my opinion, even though this has the potential to spark some controversy, I can say without a pinch of doubt that Dead Set is a lot better than The Walking Dead. We have believable and strong characters, we have ACTION and behaviour we can understand and we have a very solid movie series here. So if you didn’t watch it, do yourself a favor and watch Dead Set now!