The first thing that convinced me to watch Zombie Apocalypse was the presence of Ving Rhames in the cast: I really like him, and this told me that this movie is not really a poor, low budget zombie flick that will just make me wonder how come somebody created it. And I was right – Zombie Apocalypse is a good zombie movie (don’t expect Triple A class, but expect better than you probably imagine from a movie by The Asylum). 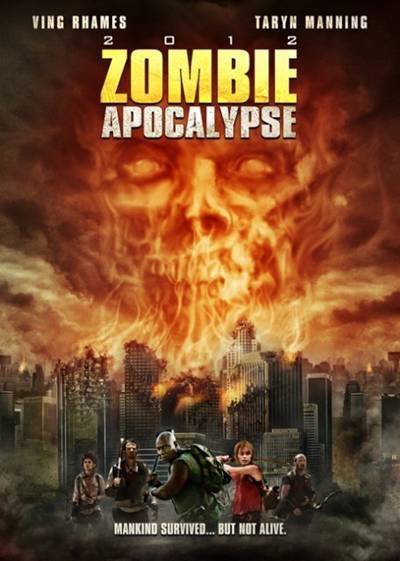 Zombie Apocalypse gets straight to the point – the apocalypse has already happened and the survivors are few and scarce. A group of three friends that just left a survivors camp meets another group that is headed to Catalina island, where they know everything is safe and sound and civilization is rebuilding.

This is the main plot line and I won’t say more to make sure I won’t spoil any surprises (there are hardly any, though). What I will say, though, is that the movie reminded me about Z.A. Recht’s Plague of the Dead (The Morningstar Strain) every now and then and that’s a great thing, because I consider this book one of the best zombie books ever written: there are both slow and fast zombies, the outbreak started somewhere far away from the US and zombies seem to have some primitive instincts still going. Again, I can’t say more not to spoil things, but trust me – the connections to Plague of the Dead are a bonus for Zombie Apocalypse.

Of course, there’s a lot of nonsense in the movie too – but the errors can be easily ignored, especially if you’re a fan of zombie movies. You can’t notice, though, that Cassie’s sword cuts heads open immediately, while in other scenes a chainsaw barely manages to cut open a skull. But these are details that won’t matter that much. However, it’s this kind of details that makes the movie just a mediocre one and not outstanding.

Because there’s a lot of potential to Zombie Apocalypse: the acting is pretty decent, the story is nice enough, the characters are mostly believable and even though they lack depth or an evolution throughout the movie, they are quite lovable. The special effects are not really the strongest point of the movie, but they’re of much better quality of what we usually get, and the zombies themselves are very well done and generally believable.

The movie also caters to a younger audience with the weapons used to fight zombies (a huge hammer, a samurai sword, a golf club and so on) and it really is surprisingly good: at least a lot better than I expected it to be, which I consider already a solid bonus for Zombie Apocalypse.

So yes, if you are a zombie fan, then most likely Zombie Apocalypse will be one of those movies you’ll enjoy watching. The story unfolds nicely and has a proper ending – something very few zombie movies or books tend to have, and this is for me a huge bonus. Therefore, make sure you don’t miss this one out!