Even though I am a fan of more complex zombie related stuff, from movies to books and even video games, every now and then I like to kick off some steam and enjoy a no-brainer. In this case, we are talking about a zombie game (available for free) – Zombie Last Night 2 – where it’s up for you to survive as much as possible and destroy as many zombie hordes as possible. And it’s not that easy! 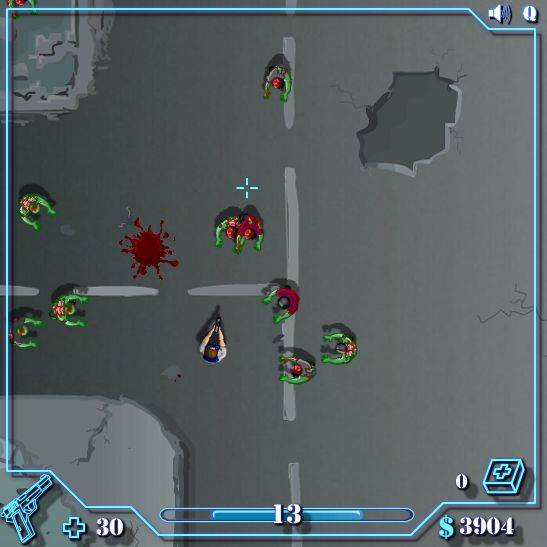 At first, you are a novice zombie killer, but slowly, even after your death, you become better: you will have the money to spend for a better weapon, for increased stats and speed and health and so on in order to become even better at killing these zombies. Which is fun for a while until you get bored by the same mechanics and outnumbered by the zombies.

But it is fun while it lasts and if you want to, you can give Zombie Last Night 2 a try here. It’s free! 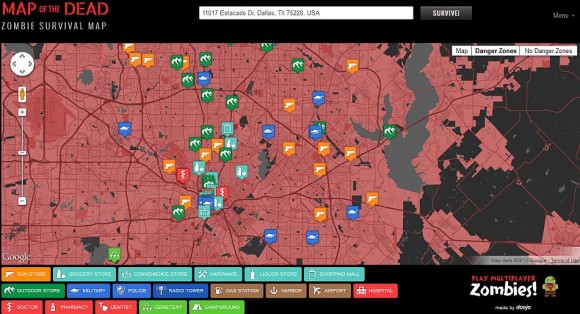 Not many highly anticipated the release of Ground Zero, but I think that all indie filmmakers should be supported and encouraged if we want the zombie genre to deliver great gems and big blockbuster titles. Apparently, Ground Zero is from neither category and falls in the “ambitious project” range.

Ground Zero tells the story of two professional “cleaners” who are hired to collect a frozen corpse located high in the mountains and dispose of it in an old warehouse, unaware the body belongs to political activist Darius, brutally assassinated by Nat-Tech Corp. after injecting himself with a deadly virus.

A swiftly-defrosting infected corpse in tow, they arrive at the warehouse to discover a group of amateur cleaners, a rising body count… and a rising corpse. Can our cleaners avert a global biological meltdown, or will Darius’ grave become Ground Zero?

Check out the trailer below:

As you can see, we can’t talk about a great movie but it might prove to be a pretty decent flick for those who really are into this genre.

Usually, “limited theatrical release” means that the movie is so poor or unknown that nobody wants to play it, and it might be the case of Zombie Dawn too, a Spanish zombie movie that prepares to infect a few big screens in the US. However, we might be up for a really pleasant surprise in the end so if you get the chance, say “why not” and go check out Zombie Dawn (screen dates below).

Here is the synopses of Zombie Dawn:

A mysterious incident at a remote mining facility unleashes a zombie horde with an appetite for human flesh. It decimates large portions of the cities and countryside. The only course of action is to rapidly enclose the infected areas and seal them off from the rest of the remaining, living population.

Now. 15 years later the tattered remains of the government and the mining corporation responsible for where the initial event took place commit themselves to finding out what may have happened at the mining complex. The solution is to covertly send a group of mercenaries and scientists into the quarantined zone to find answers.

We all know what they will find there and the trailer shows it with no mercy: zombies. You can check out the trailer below:

As I said earlier, Zombie Dawn doesn’t look like the best zombie movie ever released but these indie flicks might come with some really pleasant and unexpected surprises and the only way to know if they really are the sh*t, we have to check them out. I don’t know about you, but I would rarely say no to a zombie movie.

So check out the theatrical release dates for Zombie Dawn in the US and maybe you have time to check it out:

One of the most popular anime zombie-themed shows out there, High School of the Dead, will kick off the second season pretty soon, to the delight of the fans of the genre. I am not one of them though and I prefer my zombies in movies or books, but probably for High School of the Dead we can all make an exception because it’s an incredibly well done zombie series!

The start of the second season of the series has been announced by a trailer that shows that we’ll get the same high quality experience as well. Check out the High School of the Dead Season 2 announcement trailer below (Wait for it…):

UPDATE: It appears that I got fooled too – it was nothing but an April Fools joke. Thanks for letting me know.

Usually, low budget zombie short movies are nothing but crap but every now and then a project that gets out of that D-class movie appears and I am happy to write about one today. We Are What We Eat is a short British zombie movie written and directed by 16 years old Sam Toller – and this should be a reason strong enough to make you curious about the movie.

We Are What We Eat tells the story of high school girl Nicole that is bitten by one of her friends that turns zombie (or maybe she’s not bitten… who knows?). It’s a good premise, even though it basically brings nothing new to the genre, but we’re talking about a genre that doesn’t have many rooms for innovation in the first place. 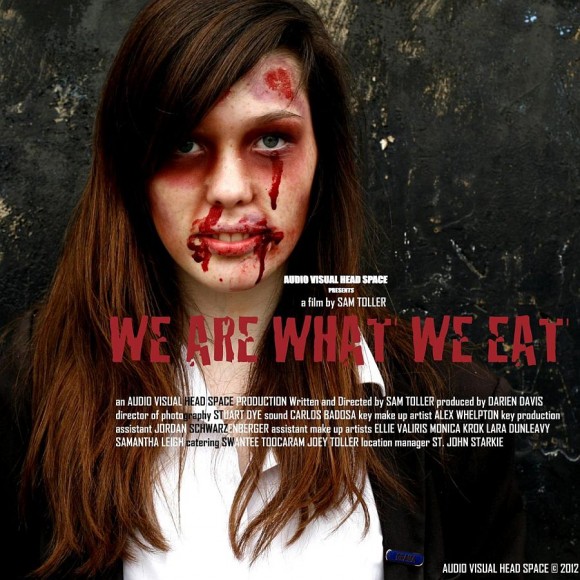 What you notice first from We Are What We Eat is its ambition: although obviously a low budget movie with amateur actors and shots that are way too lengthy and boring, this zombie short is not made like your regular low budget short. The make-up is fantastic for these levels, the image quality is great and overall everybody did their best to turn something otherwise cliche and unspectacular into a pretty solid project.

Probably you won’t fall in love with We Are What We Eat, but you won’t hate it either. What matters the most is that the shots themselves are beautiful, the potential for future movies created by Sam Toller (and maybe together with the same team, minus the school teacher) is great: after all, we’re talking about a movie made by a 16 years old that’s better than half the zombie shorts I’ve seen in my life (and I’ve seen a lot).

The zombie movie We Are What We Eat will have it’s premiered at Seattle’s NFFTY, and you can find more information about it on IMDB. So if you have the chance, check this movie out, as an encouragement for the young writer/director and the promising young actors. 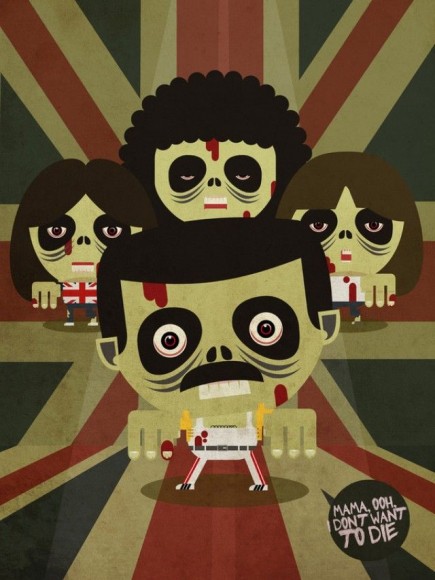 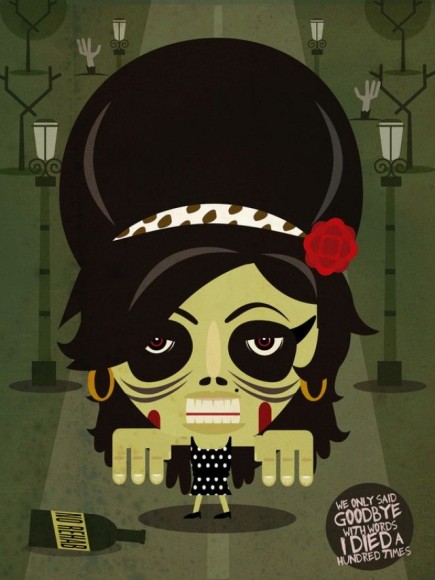 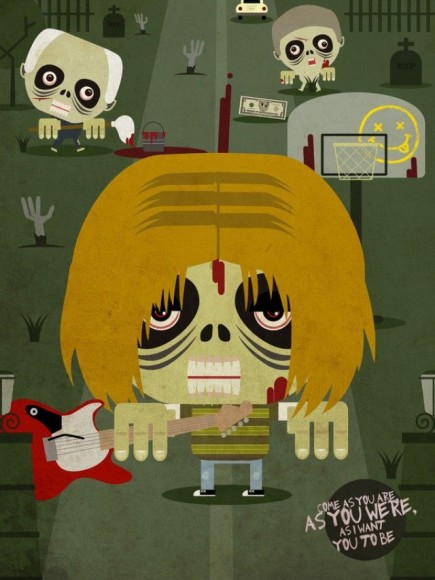 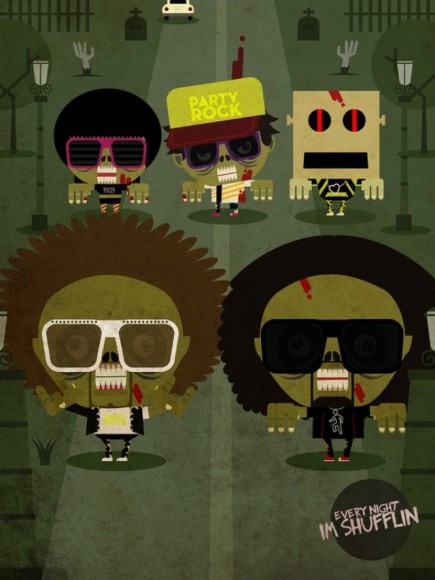 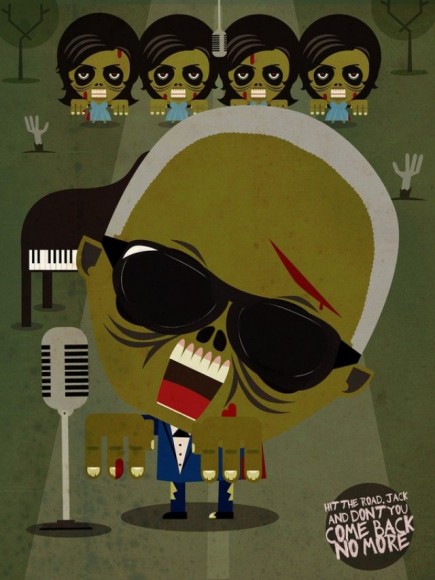 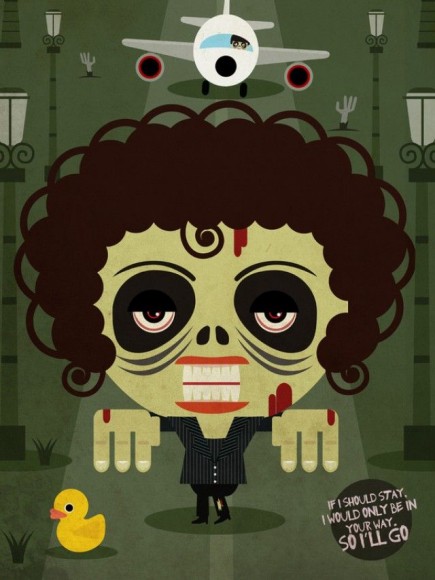 If you want a bit of an Walking Dead feeling on your iPhone, why not go to Tony Moore himself and download a zombie wallpaper right now? You can check out the three wallpapers below and download the one you like the most to bring zombie awesomeness to your iPhone screen: 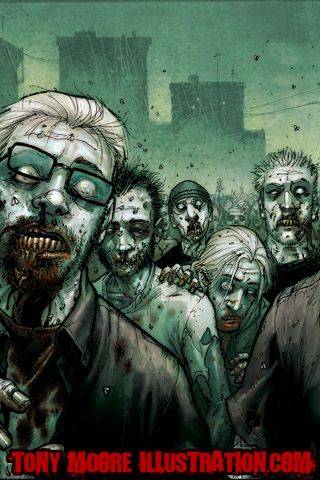 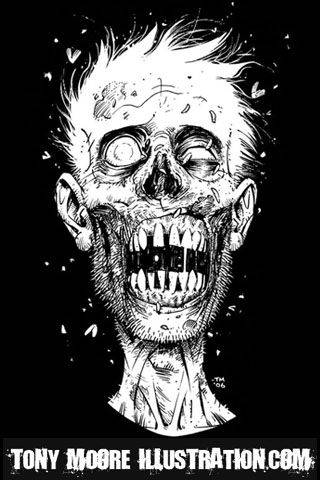 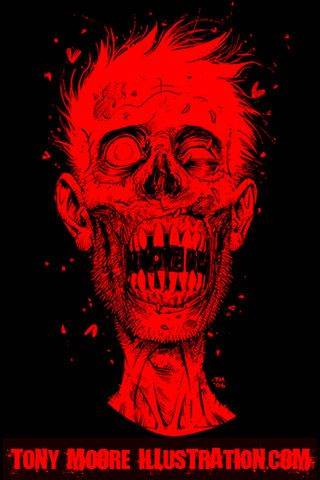 I think that our lives are better because Tony Moore is here to draw zombies for us!

Apart from a more casual Walking Dead game that we’ll get on Facebook, fans of the TV show and the comic book series will also get a more hardcore version, the Walking Dead video game created by Telltale Games, which will be released pretty soon. And now the first ever trailer for The Walking Dead game has been released and you can check it out in a video below.

Created by animator and director Daniel M. Kanemoto, the trailer blends 2D and 3D imagery in stunning fashion as homage to the art of the original comic book world on which Telltale’s game is based. Kanemoto was asked by Telltale to create the trailer because of a “fan made” Walking Dead title sequence he had made, which can be seen at www.exmortisfilms.com.

Check out the Walking Dead video game trailer below:

Even more interesting is the fact that the developers of the game, Telltale, have also kicked off a pre-order campaign on their site, which has a pretty interesting incentive: there is a grand prize that if you win, will have you “put into an episode of our The Walking Dead game as a human character and murdered gruesomely – only to be resurrected as a member of the undead and put down once and for all!” Absolutely amazing – too bad that there’s just one prize, I’m sure there will be a real fight for it.

Here’s how the winner should expect to look like a zombified, Walking Dead version of a rotting corpse:

Everything seems to be really nice when it comes to The Walking Dead video game from Telltale, don’t you think?

Etan Cohen is about to make his debut as a director with Boy Scouts vs. Zombies, a horror-comedy that has been picked up by Paramount recently. The movie will tell the story of a bunch of boy scouts who must save their fellow girl scouts from a bunch of zombies that are there to ruin an otherwise perfect camping trip.

Personally, I am not a big fan of comedies involving zombies, but I will never say never to a zombie movie, especially to this Boy Scouts vs. Zombies which might be a pretty big budget project. Also, according to Hollywood Reporter, the script of this movie made it to the 2010 Black List of Hollywood’s most-liked screenplays.

Cohen will be supervising the re-writing process of this movie by Lona Williams (Drop Dead Gorgeous). Hopefully this will prove to be a solid movie and not just a brainless comedy!